What is a National Park?

A national park is an area representative of a natural region and whose vocation is to preserve natural and cultural heritage. The ecosystems thus protected from logging, mining, and hydroelectric exploitation can develop according to their natural processes for the benefit of future generations.

A national park also has an obligation to make the territory accessible so that everyone can discover the natural and cultural resources it protects. Discovery programs and low-impact activities, such as hiking, canoeing and camping, are the preferred means of discovering these areas.

The national park concept is everywhere in the world, and Québec is no exception. The actual network meets all of the international standards defined by the International Union for Conservation of Nature (IUCN). In this context, Québec’s national parks are managed to maintain balance between the conservation of natural and cultural heritage and public access.

The History of the Creation of Parks in Québec

The adventure of parks in Québec began in 1895 with the creation of Parc de la Montagne-Tremblante (today Parc national du Mont-Tremblant). At this time, the “park” designation aimed to ensure sustainable use of forest and wildlife resources rather than total protection of the territory. The following year, Parc des Laurentides was created (which became Réserve faunique des Laurentides, Parc de la Jacques-Cartier and Parc des Grands-Jardins in 1981). It was not until 1937 that a third park was created, namely Parc de la Gaspésie.

Until the late 1970s, some other areas were given the park designation, such as, in 1950, Parc de La Vérendrye (which became a wildlife reserve in 1979). But Parc du Mont-Orford, created in 1938, was the first to be dedicated to the conservation of the natural environment.

Then came 1977. The Québec government created the Parcs Act, empowering it to establish conservation and recreation parks within which the exploitation of resources (except for fishing) was prohibited. The first parks confirmed under this new law were Parc du Mont-Orford in 1979 and Parc du Mont-Tremblant, Parc de la Gaspésie, Parc de la Jacques-Cartier and Parc des Grands-Jardins in 1981. All of the parks in today’s network were progressively established under this Act.

In 1999, the government gave Sépaq the mandate to manage the activities and services of the parks located south of the 50th parallel in order to protect and enhance them in the perspective of an international caliber network.

Then in 2001, the Parks Act was amended to replace the concepts of conservation and recreation parks with the designation of national park, meeting the criteria established by the International Union for Conservation of Nature (IUCN).

The story does not end here because the Québec government is currently working on the creation of many parks that will mainly be located north of the 50th parallel. Parc national des Pingualuit, created in 2004, is the first example.

Established in 1977 and amended in 2001 to incorporate the national park concept, the Parks Act first defines the official mission of the parks with the following statement:

"1. b) A national park whose primary purpose is to ensure the conservation and permanent protection of areas representative of the natural regions of Québec and of natural sites with outstanding features, in particular because of their biological diversity, while providing the public with access to those areas or sties for educational or cross-country recreation purposes."

The Act regulates the establishment of parks, and the administration and adoption of these regulations. Under this Act is the Parks Regulation which specifies various issues, including zoning, access conditions, stays and the practice of activities, as well as employees powers and duties.

Sépaq’s mandate is to manage activities that take place in the national parks south of the 50th parallel, including activities related to conservation and education, as well as outdoor activities, reception, accommodations, and maintenance. Each park is run by a management committee composed of the Director and managers of the conservation and education service, customer service and group services, with the aim of effectively circulating any information to all staff while ensuring the harmonization of the activities related to each service.

The conservation and accessibility mission is always at the heart of our concerns. The staff is aware of this. Efforts are made to ensure that the employees understand the importance of their roles and that of each person to make sure that the mission is respected. One of the actions Sépaq has taken in this direction is the development of the Parcs Plus training program for all of its personnel.

Designation of a National Park According to the IUCN

The International Union for Conservation of Nature (IUCN) establishes international criteria for the designation of protected areas. Québec’s national parks network fall into category 2 – “National Park”, whose management objective is mainly to protect ecosystems and for recreational purposes 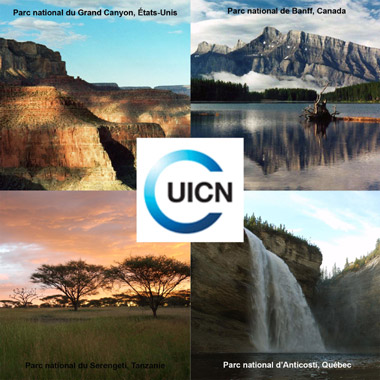 The IUCN defines a national park as a natural area designated to:

c) provide foundation for spiritual, scientific, educational, recreational, and visitor opportunities, all of which must be environmentally and culturally compatible.