When the stars align

For an astronomer, an eclipse is something astonishing and wonderful. And a total solar eclipse is one of the most impressive astronomical phenomena of all!

On August 21, millions of people will gather in the United States to witness a rare and spectacular event: a total solar eclipse. And with a partial eclipse on the agenda, Québec will not be far behind.

What is a solar eclipse?

Though rather uncommon on Earth, eclipses are nevertheless far from rare in the solar system or the universe in general. Solar eclipses occur during the day, when there’s a new moon. The moon passes between the Earth and the sun and projects a shadow on our planet.

On August 21, the lucky people who’ll find themselves in a band of barely 100 km in the United States will witness a unique phenomenon: a total eclipse. For two and a half minutes, the sun will be completely hidden. It is at this point alone that we can observe the magnificent solar corona, the atmosphere of our star, sculpted by its magnetic field. This is also when the sky darkens, so much so that we can see stars and planets in broad daylight. The temperature drops by more than 10 degrees Celsius, the wind rises, and animals begin to mill restlessly about. The whole phenomenon is so bizarre that nature itself seems disoriented. In the midst of a total eclipse, one can even enjoy a 360-degree view of the colours of a sunset! 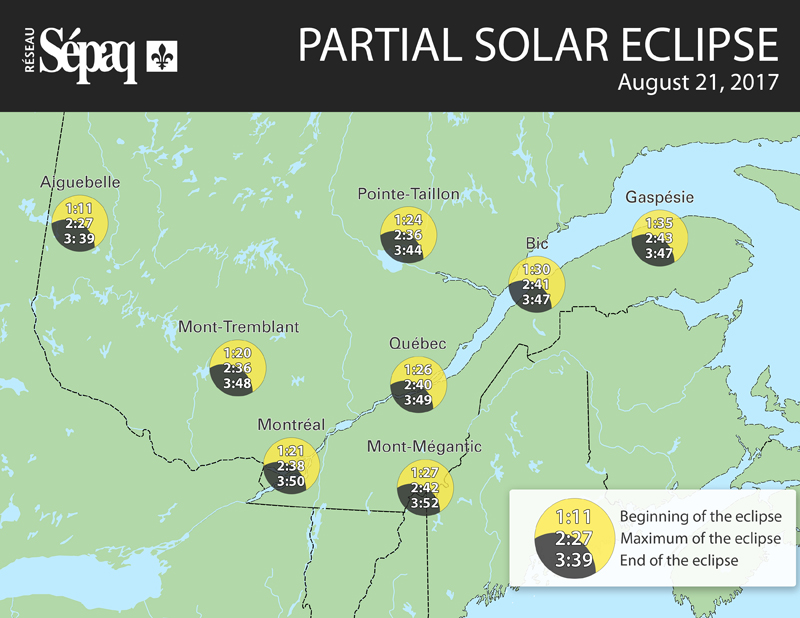 This period is always preceded and followed by a partial eclipse. This is also the type of eclipse that we can see if we’re just outside the totality zone. The further we move away, the less the sun is hidden by the moon. When it comes to Québec, about half of the sun will be hidden. The phenomenon will begin around 1:21 p.m. and end at about 3:50 p.m., depending on the region. The peak of the partial eclipse will occur at around 2:38 p.m.

Consider yourself lucky, because there’ll be a total eclipse in southern Québec on April 8, 2024! Afterwards, there won’t be another one until around 2100.

When observed in a safe way, a partial eclipse remains an impressive sight and a wonderful opportunity for discovery. However, it’s important to understand that even though the sun is partially hidden by the moon, its light remains as dangerous as during daylight hours. So please refrain from looking directly at the eclipse without any protection for your eyes.

Whether before or during an eclipse, staring at the sun for a long time can cause irreparable damage to your eyes. And it’s even more dangerous to look at the sun through binoculars or a telescope. The only safe moment to look at the eclipse without any protection is during the totality phase, because the whole surface of the sun is then hidden by the moon.

A few options are available for you to watch the partial eclipse safely. You can watch the sun with eclipse glasses that block the sun's intense rays. Otherwise you can observe the eclipse indirectly using a shoebox. It's even possible to check it out under a tree, watching the shadow of the leaves on the ground. Warning! The sunglasses you normally use are by no means an effective protection for looking at the sun.

As part of the ASTROLab Astronomy Evening held at the foot of the mountain in Parc national du Mont-Mégantic, you can discover the great celestial dance leading to this fascinating spectacle by attending the show entitled Éclipses.

The day of the eclipse, Monday, August 21 from 12 p.m. to 5 p.m., the park will organize a safe observation session with instruments equipped with solar filters. It will also offer visitors organized activities throughout the afternoon, in addition to presentations in the multimedia room. An experience not to be missed!

Please note that ASTROLab will be the eclipse-watching activity hub during the afternoon of August 21. The Popular Observatory will be accessible for visits starting at 2:30 p.m. and a regular astronomy evening will be held on August 21 as well. Reservations required.

Keep up to date with the activities by consulting the Facebook page of the ASTROLab of Parc national du Mont-Mégantic.